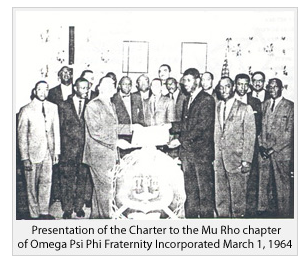 The Omega Psi Phi Fraternity was founded on November 17, 1911, in the office of Associate Professor Ernest E. Just in Thirkield Hall (Science Building) at Howard University by four outstanding men: Ernest E. Just, Oscar J. Cooper, Edgar A. Love and Frank Coleman. These four men believed that college educated men had something to give mutually that the University could not provide. On October 28, 1914, the Fraternity was incorporated and declared a national organization by the United States Congress under the laws governing the District of Columbia.

Some 50 years after the Fraternity’s incorporation, Mu Rho, “Maryland’s Capital Chapter,” was chartered in Annapolis, Maryland, on March 1, 1964, as a viable, financial chapter of Omega Psi Phi Fraternity, Inc. This was a very significant year in the history of the world. President Kennedy had just been assassinated, President Johnson signed the Civil Rights Act, Jack Ruby was given the death sentence for killing Lee Harvey Oswald, Sidney Poitier was the first black to win an Oscar for Best Actor, Dr. Martin Luther King, Jr. won the Nobel Peace Prize, the Vietnam War was warming up, Cassius Clay beat Sonny Liston for the heavyweight title, the Beatles invaded America and Ford introduced the Mustang.Brothers Ernest Fletcher and John Lancaster joined the group before the chapter was chartered. The Charter was granted by the Supreme Council on March 1, 1964. Sixteen men lead by Dr. Emerson E. Brown were presented the charter by Brother James Avery, 2nd District Representative. The Charter members felt that a graduate chapter would help Omega to continue the simulation of high ideals and afford them to occupy a progressive and constructive place in the civic life of the community.

The 14 charter members were:

The charter officers were:

The members of Mu Rho wasted no time becoming active in the community and the nationally mandated programs of the Fraternity. The first chapter Talent Hunt program was held in April 1964 and the first Achievement Week program was held in November 1964, with the honorees being Bro. Douglas S. King, the long time principal of Bates Senior High School, as Omega Men of the Year, and Mr. John A. Mackell, a community leader from Parole, as the Citizen of the Year. The Chapter’s first Scholarship Ball was organized by Bro. John M. Weatherford and was held in December 1964. Throughout the years, Scholarship fundraisers have allowed the Chapter to provide over $40,000 to deserving high school students matriculating to college.